For matters in litigation, most documents are required to be filed with the Ontario Superior Court. However, the Court struggles to accept routine filings, as indicated by their own data, below. Additionally, as shown, the percentage of documents rejected increased on a year over year basis at almost every courthouse. This means more time and expense is required for a mundane, low value added task, and such expense is ultimately borne by the public.

The routine rejection of documents (to ‘enforce the Court rules’), would itself appear contrary to Court rules, specifically:

Ultimately, documents can be rejected for any reason (or no reason). Some highlights are below:

Some days, the Court just doesn’t like electronic signatures. 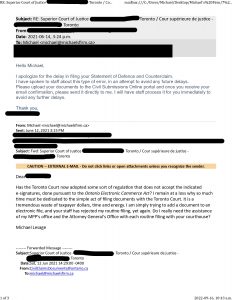 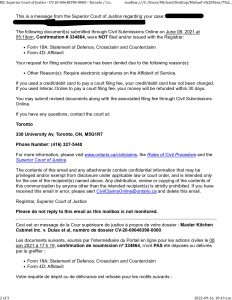 Other days, a word that should (dating from the time documents were prepared by typewriter) be underlined, isn’t. 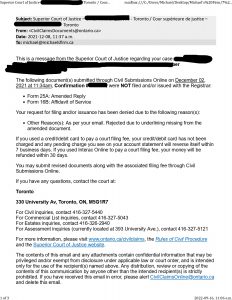 Sometimes, the court thinks there are multiple claims, and insists upon multiple filings (in each file), though there is in fact only one claim… 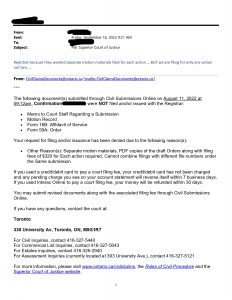 Or, the court will insist that when one person in a married couple is served (for both), that two Affidavit of Service Documents be submitted (instead of one listing  both names). 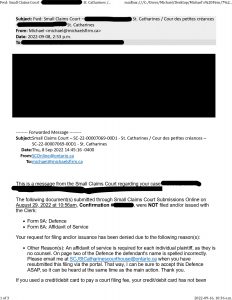 Sometimes, the court rejects documents for failing to comply with current rules, despite the documents predating the current rules (i.e. rejecting fax service at a time it was permitted) …. 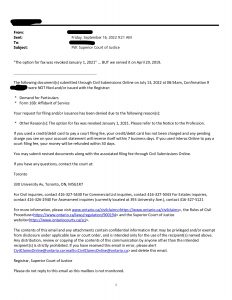 Sometimes, the court simply requires redundant materials, like motion records on matters the parties consent to (that do not affect anyone under disability). 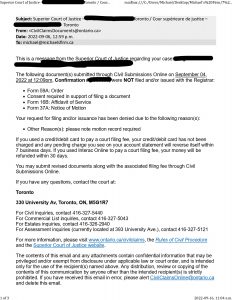 The Court Gets it Rules Wrong

Other times, the court fails to recognize that rules have been changed (i.e. that service may now (finally) be made by email), and enforces the old, repealed rules. 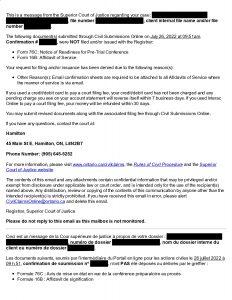 Or, the Court ‘imports’ a rule that pertains to one thing (say general Application Records, under Rule 38.09(1), into something else (such as an Application to Pass Accounts, Rule 74.18(9)), and then rejects the filing, for not complying with a rule that doesn’t apply.

Sometimes, matters are adjourned (on consent), and if court staff are bored that day, they sometimes require new materials to be filed, listing the next date, or a new placeholder date.

Sometimes, the Ontario Superior Court rejects documents, and even it doesn’t know why. 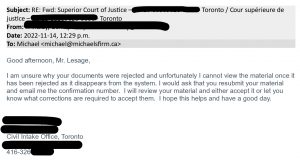 If your documents are rejected by the Ontario Superior Court for a ‘notable’ (or stupid) reason, send me the rejection (and a brief explanation), and I may redact and include it above.